Thank you for your order!

Schedule anytime: Book in the Bond app or start a reservation below.
Reserve for as little as four hours.

Affordable peace of mind: Rates starting from $80 an hour.

An entire team by your side

We are revolutionizing personal security with a nationwide Command Center of Personal Security Agents available to you 24/7. That means we are always in touch with you and your bodyguard via the Bond app whenever you need us.

reserve a bodyguard for any situation Going on a Night Out 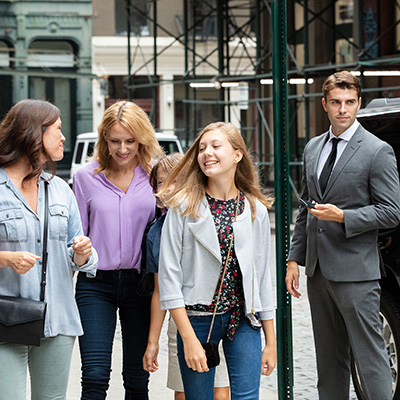 Escort You to Meetings

Enter your details below to start your reservation.
Requires Bond Premium Service.

† By clicking submit, you are authorizing Bond to charge the full amount of the estimated bodyguard service requested. A reservation agent will call you shortly to confirm your booking. Please download the app. This will allow us to simplify the reservation process and enhance your security during the bodyguard mission.

† After submitting your application, we will run a thorough process of analyzing the risk level of each request to ensure that we can provide you the level of protection that you are requiring and not placing you or the Bodyguard at undue risk. Situations we will not provide a Bodyguard to support include (but not limited to) the following: Initiate Aggressive Action towards anyone Intimidation anyone Surveillance of others Support criminal or other questionable activities. Requestors with a criminal record in the last 20 years If the Bodyguard determines that any of these conditions exist, they will disengage and you will be responsible for the remaining cost of the assignment By checking this box, you affirm that you understand and agree with these requirements. “I am happy to be part of the Bond mission. Bond offers a unique and valuable service, enhancing peace-of-mind and personal security for individuals and families..."

“I am happy to be part of the Bond mission. Bond offers a unique and valuable service, enhancing peace-of-mind and personal security for individuals and families. In particular, I see great value in Bond’s 24/7 Personal Security Agents and the novel array of preventative services for situations that do not initially reach the severity of a 911 emergency call. This includes monitoring members and being by their side. Bond has taken a professional approach to designing its services, combining security expertise, technological innovation and exceptional performance.”

Raymond Kelly, Chief Executive Officer of The Guardian Group, has spent decades both in public service and in the private sector. After joining the New York Police Department, he served a tour of duty in Vietnam in the U.S. Marine Corps. Upon returning to the NYPD, he rose through the ranks of the department, eventually becoming the longest serving Commissioner in its history, in addition to being appointed separately by two mayors.

During his tenure with the NYPD, Commissioner Kelly pioneered a number of impressive initiatives: starting the first-ever municipal-level counterterrorism unit, building a departmental Intelligence Unit that had global reach and collaboration, and more. Among other distinctions, he received the Légion d’honneur in 2006 from future French President Nicolas Sarkozy.

Outside his work with the NYPD, Commissioner Kelly has also served as Director of the International Police Monitors of the Multinational Force in Haiti, Commissioner of the U.S. Customs Service, Undersecretary of Enforcement at the U.S. Treasury Department, on the Executive Committee of Interpol. Additionally, he worked as Senior Managing Director for Corporate Security at Bear Stearns, President of Risk Management Services at Cushman & Wakefield, and Vice Chairman at K2.

Commissioner Kelly earned a Bachelor from Manhattan College, a Juris Doctorate from St. John’s University, a Master of Laws degree from New York University School of Law, and a Master of Public Administration from Harvard University’s Kennedy School of Government. "I am excited to advise Bond on its important and innovative mission of providing enhanced personal security and peace of mind to all. Bond pioneers a new paradigm of personalized security; one that is comprehensive, accessible..."

"I am excited to advise Bond on its important and innovative mission of providing enhanced personal security and peace of mind to all. Bond pioneers a new paradigm of personalized security; one that is comprehensive, accessible and affordable. The Bond platform makes individuals safer by leveraging three disciplines that I have deep expertise in, given my background in the US Secret Service and decades in the security industry: a solid grasp of the domain of personal security, application of technologies and people – the Bond Personal Security Agents. I am impressed with the quality of the overall Bond platform and visionary mission. This is the right service at the right time, offering services that are valuable and unique. I am happy to contribute my knowhow to this important purpose."

Chiko Scozzafava joins Bond’s Advisory team with 25 years of diverse strategic, operational and security experience in both the public and private sectors. She has been responsible for building strategic programs on a global scale, to include risk mitigation, threat management, executive protection, and physical security.

During her law enforcement career, Chiko has spent approximately thirteen years as a Special Agent with the United States Secret Service, with over a decade spent covering Southeast Asia. Her work there included protection, criminal investigations, as well as being an international law enforcement instructor. She also served as their Firearms Instructor, Physical Fitness Coordinator, and Ombudsman supporting colleagues across all ranks.

Chiko is passionate about innovation, technology, and believes in lifelong learning. "Having been responsible for the police force of one of America’s largest cities, I'm extremely encouraged to see Bond providing safety and peace of mind for numerous issues..."

"Having been responsible for the police force of one of America’s largest cities, I'm extremely encouraged to see Bond providing safety and peace of mind for numerous issues that don't rise to a level that requires police involvement. I'm confident that Doron and his experienced team of experts from military and law enforcement backgrounds are the ideal partners for parents and citizens on one hand, and police and other law enforcement agencies on the other hand."

Jody Weis served in the FBI for 23-years, holding every position from Special Agent to Deputy Assistant Director. As a member of the FBI's Senior Executive Service, Jody served as the Special Agent in Charge of both the Los Angeles and Philadelphia field offices, as well as working as Deputy Assistant Director in both the Human Resources Division and the Office of Professional Responsibility. During his investigative years, Jody focused on fugitives, violent crimes, gangs, and terrorism matters. He also performed the ancillary duties of SWAT, Special Agent Bomb Technician, and Firearms Instructor. Jody was also the Superintendent of the Chicago Police Department for three years where he drove cultural change and implemented policies that resulted in the lowest homicide totals in 45 years. The Chicago Police Department is the second largest police department in the US, with more than 13,000 sworn officers and with an operating budget in excess of $1.2B. Jody has also served as a guest commentator for public safety matters both on the local and national level. Throughout his 26 years in law enforcement, Jody has consistently been the enemy of the status quo, refusing to allow himself, or his team, to rest upon past laurels. He would empower his team to seek the new and to strive to be better than they were yesterday. With today's amazing technology, law enforcement is well positioned to move away from being reactive and become far more proactive, with the ultimate goal of prevention. Jody has always looked to the future for his path.